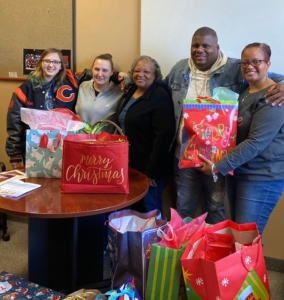 Fellowship members, a big, heartfelt thanks goes out to each one of you for participating in this year’s Angel Tree. Thanks also to Yvette Reed and the Women’s Ministry for their collaborative efforts with Toys for Tots. Because of this collaboration and your thoughtful generosity, we were able to touch the lives of more children & youth than ever before in the history of Fellowship. This year we were able to bless approximately 180 youth and children. That’s almost double the lives we’ve touched previously. God be praised and may He get all of the glory!
Kelvin Turner from YMCA’s Juvenile Justice Program expressed that seeing the smiles on the faces of the young people as he delivered the gifts was indescribable and priceless!
There were so many gifts to inventory and sort through on Saturday, plus, there was an incredibly steady stream of Shipmates coming through dropping off their gifts that morning. That made it difficult to take many pictures of the overflow of gifts that had accumulated in the office. But here are a few that we managed to snap. The group photo shows Ms. Rachel Rauma & her daughter (in the Cooper High School letter jacket) of Pillsbury United Communities and Mr. Kelvin Turner of the YMCA.
NOTE: Special thanks goes to Barbara Foster and LaVern Callum for stopping whatever they were doing on Saturday morning to help out with the sorting and inventorying.
Special thanks also to the few of you who took on extra names at the last minute, standing in the gap to make sure each and every young person on our list had something to open. God bless you!!
Until next year, 2019 Angel Tree is Mission Accomplished in Jesus name!
nfoster@fellowshipmb.org2019-12-27T13:37:04-06:00