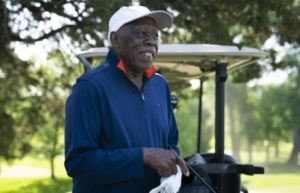 Bob Shelton will turn 86 on July 25. He figures to have totaled 85 or lower for 18 holes at Hiawatha Golf Club a few times in the seven weeks before gaining that extra stroke in the relentless battle of golfer vs. age.

Shelton is black and grew up in New Orleans during decades of virulent segregation. He was in the military in the 1950s. He worked as a caddie before and after that, mostly at New Orleans Country Club and Metairie Country Club.

Freddie Haas Sr. was hired as Metairie’s head pro in 1938. The senior Haas taught the fundamentals of the game to Shelton as a young caddie, with this twist:

“Fred Sr. didn’t know he was teaching me the game,” Shelton said. “He didn’t want to be teaching me. I learned by caddying for him and studying him. He had a sweet flow to his swing.”