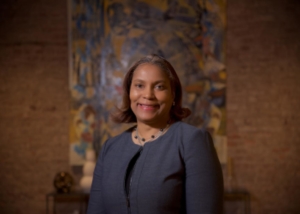 Congratulations to Gloria Stamps Smith on being awarded the Minnesota Women Lawyers’ Myra Bradwell Award.  This award is presented to an MWL member who expresses the highest ideals of the legal profession and who possesses the qualities exemplified by Myra Bradwell such as courage, perseverance and leadership on issues of concern to women.

Ms. Stamps–Smith grew up in Mississippi and believes the mentors she had growing up inspired her commitment to serving others to her community. She states she has always been surrounded by strong women who instilled in her the value of giving back to the community and showed her the rippling impact of servant leadership. Ms. Stamps–Smith also enjoyed learned about strong women in American history. Harriet Tubman and Shirley Chisolm were two historic “sheroes” who greatly influenced Stamp-Smith. Harriet Tubman – a slave who escaped to freedom but would not rest until she rescued as many slaves as her body would allow, placing her own life and freedom in jeopardy – exemplified not being comfortable when others are suffering.  Shirley Chisolm who famously said “service is the rent we pay for living on this earth” reminds Stamps–Smith that she is called to serve others and that calling is greatest when the difficulty is greatest.