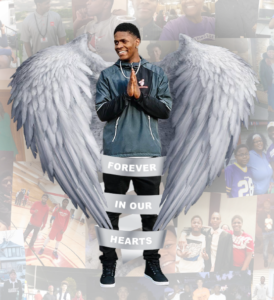 Family experiencing outpouring of support from community, classmates and clergy

(MINNEAPOLIS – November 16, 2019) – Funeral services for Da’Qwan (Qwanny) Jones-Morris will be held Saturday, November 16, 2019 at 2 p.m. at the Fellowship Missionary Baptist Church (FMBC) in Minneapolis. Da’Qwan, a senior at Henry Sibley High School, passed away suddenly due to a November 6th accident. News of the tragedy that took the life of the standout football player and team co-captain who planned to attend a Minnesota college after graduation stunned the community.

Born April 9, 2002 to Monica Jones and Tremayne Lamont Morris in St. Paul, Da’Qwan began playing team sports at age five, first basketball, then flag football, and then on to assume a leadership role on his high school football team. His interests extended beyond sports. Baptized at FMBC, Da’Qwan sang in the youth choir. It’s said he was deeply devoted to and loved his family, volunteering and was a fashion enthusiast. Family members describe him as an avid gamer who excelled to a level that he developed friendships across the country, earned income and had hopes of one day entering a gaming tournament.

“We at Fellowship, are deeply shaken by this tragedy. I, along with the entire congregation, are committed to providing spiritual support and continued assistance in in the days, weeks and months ahead,” said Rev. Albert Gallmon, Jr., senior pastor.

Da’Qwan’s senior pictures were taken the weekend prior to his death and his family says the photos beautifully captured a brother and son known for his joyful spirit, big heart, playfulness, and vitality. He spent summers attending Freedom Schools, enjoying community celebrations such as the Rondo Days Festival & Grande Parade and traveling.

“Da’Qwan loved spending quality time with his family, including his dog Hercules Jones, whom he considered his best friend. Da’Qwan was the go-to family babysitter and created connections with younger kids. He also had a big appetite to match his big

heart,” says his mother Monica Jones. She continues, “He was my beloved son, we miss him terribly and we are grateful for the love, prayers and support we have received from our Fellowship family and the community.”

The wake and 6 p.m. ceremony will be Friday November 15th at Estes Funeral Home. The viewing is Saturday, November 16th from 1-2 p.m. and the funeral is at 2 p.m. at Fellowship Missionary Baptist Church, with the Reverend Albert Gallmon, Jr. officiating. A repast will be held immediately following the service at City View School of Innovation and French Immersion at 3350 N 4th Street, Minneapolis, MN 55412.

Church at 3355 N 4th Street, Minneapolis, MN 55412. The family has requested that in lieu of gifts, donations may be made at: paypal.me/DaQwanForever.

NOTE TO EDITORS: Cameras will be permitted on the second-floor level, referred to as the balcony area. Church ushers will provide directions. The family has a designated spokesperson who will be available.